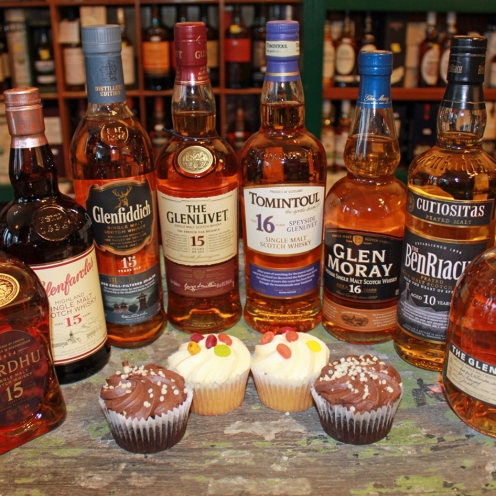 The Whisky Shop Dufftown recently ran a competition to find the best Speyside whisky inspired Cupcake of Muffin. Contestors had to think whisky, and invent a whisky inspired cupcake or muffin.

Of course a (well available) Speyside whisky had to be either in the cupcake, or had to fit the recipe in a pairing. After a couple of rounds, the judges and organisers had come up with a series of cupcakes and muffins that would be judged in one final round by the festival visitors, the first weekend of May.

Both of us joined in the competition, and although we had a lot of fun with the preparations and had some of our colleagues pre-taste and give us feedback and request more batches at some point. Sadly, a two night stay at The Dowans Hotel in Aberlour, a special distillery tour and a voucher for The Oakwood Cookery School in Elgin was not to be ours – we did not win or even got into the finals (Mr. Lord is well known for taking bribes, so it appears we did not offer him enough), but nevertheless we will share our recipes, which we still thing turned out quite all right.

Sticky toffee pudding muffins
Recipe for a tray of 12 muffins

When this competition came by for pairing some cupcakes or muffins with some whisky from Speyside we immediately thought of the love for the best Scottish desert for a curved waste-line out there; the sticky toffee pudding. We just love it and can not say no to it.

Thinking of that dessert and the Speyside region with its many great whiskies to choose from, the idea shifted a little from the known pudding recipes and we started to combine some cranberries, chocolate and fudge. A rich and full muffin. Some experimenting was done to find the right balance in the omnipresent sweetness, and after gaining a few extra curves because of the intensive testing the following recipe was created.

If you have the time it is preferred so soak the dried cranberries overnight, but otherwise try at least to “marinate” them for a couple of hours for a better result. Put the dried cranberries in a bowl, add the whisky and the juice, and scrape the lemon for some zest and add that to the mix.

The lemon will give the cranberries an extra bite to balance out the chocolate and fudge. For a whisky we tried it with some The Macallan Amber and some Glen Garioch (we know that is not officially Speyside but for testing it was very good), and from experience (for science) we know this will go well with some fruity drams like an Aberlour 10 or Glenfiddich 15 too.

Preheat the oven on 180 degrees Celsius. Put the flour and the baking powder through a sieve. Add the salt and sugar to the mixture and mix it gently. Mix in another bowl the eggs, oil and vanilla. Put the bar of chocolate that you already broke down in some bigger pieces in the kitchen machine to get it to smaller chunks. Don’t leave them too big, but just like in a chocolate chip cookie chunks. Cut the fudge cubes into 6 pieces.

Put the egg/oil/vanilla mixture in with the flour. Then put it in the bowl with the juice, cranberries, whisky and lemon zest. Mix this with a mixer, we have just a simple hand mixer, but fine for this job, and make sure you have a smooth batter. Don’t mix too long or it will become “tough” and not nice any more.

Put in the chocolate chunks at the end of mixing. Fill the tray with the paper forms (we prefer the thicker paper ones for a cleaner result after baking) and fill them. Not till the top yet, because there is one more thing to do. Put into every muffin three pieces of fudge and push them down a bit. Cover them with some more batter. Then put them in to the preheated oven for 25-27 minutes, and then let them cool down before diving in…

Gorgonzola-pear muffins
Recipe for a tray of 12 muffins

Inspired by mother’s recipe for savoury cakes with pear and Gorgonzola, we decided to adapt her recipe for the competition.

In the 24-48 hours before baking cut the dried pears into small slices, of about a ½ cm³. Soak the cubed pears in the Aberlour and put away under a lid for at least a couple of hours. A good measure is when the pears are just covered with the whisky. The pears will soak up the whisky nicely.

On the baking day bake the bacon until dry and crispy, and break into small pieces. ½ cm² will do nicely. Preheat the oven to 180°C. Cut or break the cheese in a bowl into smaller chunks and mix this with the lovely smelling whisky soaked pears and bacon.

Sieve the flour, baking powder and salt in another bowl, add the eggs and buttermilk and mix with a hand-mixer on low speed until you can see a smooth result. Add the Gorgonzola and pear, mix for 2-3 minutes on low speed, and finish on maximum speed for another 10 seconds.

Put the dough into a prepared cupcake tray, split the mix evenly over the 12 tins and put the tray into a preheated oven for 25-27 minutes. While baking your muffins, gently bake the two other slices of bacon in a frying pan until crispy, and cut them into small slices. When the muffins are ready and out of the oven cooling on a plate, gently push the slices of bacon into the still soft dough.

*¹ Alternatively, other sherried whiskies can be used, but too much sherry influence will overpower the pear flavours. Think Glenfiddich 15yo Solera, Balvenie DoubleWood or the Macallan Amber.

*² Another 50 grams can be added to make the muffin a little more creamy, but this will also make it quite a bit heavier on the blue cheese flavours as well, overpowering the whisky-pears.

Enjoy the recipes and your own explorations in the world of baking with whisky!
Copyright notice: Photo bottles and sweets by the Whisky Shop Dufftown, rest by WhiskySpeller