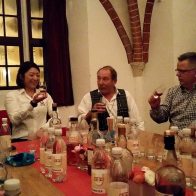 In Groningen, up North in the Netherlands, the Whisky Festival Noord Nederland (WFNN) has celebrated its tenth anniversary. Because we have been regular visitors to this festival and always had fun, we decided to dig deep into our pockets, and have them entertain us during this extra-special edition from Thursday evening through Sunday afternoon.

On this stormy Thursday in March 2015, we found ourselves traveling by train to Groningen, packed with fresh clothes so we could refresh between sessions and after parties. In the lobby of the Martini hotel we ran into Martine Nouet with Hans and Becky Offringa, before we went to our room and undo ourselves of the luggage. During a quick lunch at the restaurant we came to realise that the long weekend-party we were looking forward to, was really here. And so were we. Ready as we could be, or so we thought.

From our hotel it was a short walk to restaurant Bistro het Gerecht, where we were expected at the opening dinner. We arrived right on time, as the weather decided to turn, but we were invited inside with the sound of bagpipes, and once inside we were welcomed with a dram of the first festival bottling from 10 years ago, a 15yo Glentauchers. This paired very nicely with the first course of the dinner, an amuse of chicken liver, chocolate and hazelnut, a good start of the dinner, that consisted of 10 courses, each course paired with a whisky by the whisky chef Martine Nouet and the bistro’s new chef, Henrice Dijks. More about the dinner in another post (soon). Filled with great food, new experiences and a big smile on our faces, we went back to the hotel, get our feet up and relax for three more days of fun.

The Friday afternoon was free of whisky, and we found ourselves wandering through the beautiful city of Groningen. Later that evening we met some friends for our annual Groninger Festival Session together, and after a beer and dinner at Mr. Mofongo (which was less pleasant – food-wise – as we remembered from last year’s visit) we went to “the AA Church” (yes, we know about that name), for our first festival session.

As in the previous seven years (the first two years were at another location), the Church was once again the chosen venue for the festival and while walking in, everyone was welcomed by a very relaxed Maltstock crew, flyering for their own festivities in September later this year. Walking around for a bit, chatting with people and browsing the tables (we always try to do a “dry lap” so we know who and what is where), we would recommend for everybody to look up once in a while, to have a look at the architecture and details of the stain-glass windows and the beautiful organ.

We had decided to do some masterclasses, and since this was the tenth anniversary, there were some pretty special ones. On the Friday we had chosen a masterclass from Martine Nouet, where we got to blend our very own whisky, based on five different cask-strength Zuidam whiskies. The art of blending is not something one can master in one session of an hour, that is something that has become clear to many of us present. The results were fine, but nothing excessive came out, as far as we are concerned. As an added bonus, everybody could bring their own 20cl bottle home with them.

On the Saturday afternoon we had chosen a masterclass from (once again) Martine Nouet, where she had paired food (prepared by Inge Lanckacker – chef without restaurant) with whiskies. Very nice to see where one whisky can be a something completely different drink with a sweet or a savoury snack. More on this on our post about the before mentioned food and whisky pairings, coming soon.

Saturday-evening, we had decided to be completely pampered and booked a VIP session, where we could enjoy several of the chosen drams from the festival area in a separate room and where every now and then a true whisky-VIP (Ad de Koning, Hans Offringa, Martine Nouet, Gordon Muir Yumi Yoshikawa and Charles MacLean) came in and talked about a bottle or two they had brought with them to share with us. Snacks and chocolates were (once again) created by the festival’s chef Inge.

We had also chosen Charles MacLean as our host for the masterclass on the Sunday afternoon, where he poured four different Berry Bros & Rudd bottlings; a rather young, but quaffable Strathclyde from 2005, a 1997 Clynelish (which seems to be a magical year for Clynelish), an Aultmore from that same year and a 14yo GlenGoyne from 2000.

More masterclasses were to be had, but one to mention that we did not visit ourselves, was the one hosted by the Highlander Inn’s new owner Tatsuya Minagawa (formerly know as Europe’s Suntory Brand Ambassador) and Chichibu’s Brand Ambassador Yumi Yoshikawa. They presented a range of Japanese whiskies that silenced the Groninger crowd and made some new “converts”. This masterclass was similar to the one from Maltstock 2014 where Yumi and Tatsuya brought cask-samples and available bottlings to share. Chichibu and the Highlander Inn had a small shared stand where Chichibu whiskies and brought some amazing new makes and juvenile matured whiskies, where the last remains of a bottle of “the Joker” was one of our absolute favourites, for €15,- a dram.

This brings us to a sidenote. Although we had a great time, the festival itself is not cheap. We had to think really, really hard about buying the passe-partout to enter all four sessions for the price of three, plus a VIP-session, where €30,- worth of drams is included in the price. Compared to previous years, only most of the “standard” distillery releases were free of charge, many drams needed to be payed for – in some cases rather handsomely. This seems to be a trend on most festivals we attend lately, which is a shame. Another trend seems to be that more and more people are pressed into the venue, 100 or even 50 people less would greatly have added to the atmosphere. Also – and then we continue with pleasant things again, had we not known this was the tenth anniversary, we would not have noticed during the festival itself, save for the very nice masterclasses.

Before and after each masterclass we had enough time on each session to walk around and talk to the many people we have become to know in the short period we are walking this whisky trail. Sharing a dram with many of them and catching up on what happened when and where, walking about for a bit and eating a bite of one thing or another, you would think we would have seen every bottle on every table, and we would have tasted every interesting bottle available. Nothing could be further away from the truth. We once more have failed to have a look at the tables of the very nice people of the Glenrothes, missed most of the available drinks at the Diageo stand except for the ones paired with food (see the theme of our visit this year?), and we missed some corners of the church where the smaller importers and distributors shared their bottles. Let’s make this our mission and promise for the next big gig.

The last thing we would like to mention is that an initiative has been launched on the festival to crowdfund a new Dutch whisky distillery, following the style of the Scottish whisky industry by using traditional pot stills. A great initiative, and with the support of all of us, they can make their dream come true. Their website is in Dutch, of course.

As with a good bottle whisky, where the bottom seems to be getting in sight quicker than expected, this festival was over before we had the idea it had even started. We had a marvellous time and shall be back next year.

As always, more pictures can be found at our Facebook page.