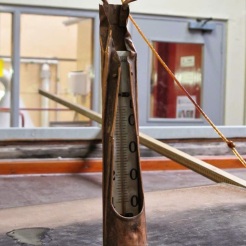 Our third festival day was another busy day. We would start around 11:30 at the Laichmoray hotel in Elgin, so we decided to sleep in and have a relaxed morning. Following the A941 up from Craigellachie, we arrived without any problems at the hotel, where a bus was waiting on us to tour us around the four distilleries of the day.

We were welcomed by senior site manager and Spirit of Speyside festival co-organiser Erik Walker (we refrained from asking him if he was related to the Walker dynasty – him working for Diageo and all).

Again, the Maltstockers were present, accompanied by the organising couple of the Whisky Festival Noord Nederland, an English couple we had met previously during one of the earlier tours, a group of German Whisky enthusiasts and two “journalists” of an unknown magazine/ site/ blog.

With the bus filled, we started towards the site of the Linkwood distillery, where trainee site operation manager Pierrick Guillaume was waiting for us. In 2013 the facility has upgraded to three sets of small-ish stills, making them able to produce a massive 5,6 million litres of alcohol per year. They can reach this large quantity of spirit, partly because of the large, slow fermenting wooden washbacks, each producing enough to fill four (!) fast-running wash stills that run for 50 weeks per year. The spirit stills are slightly larger than the wash stills.

What got our attention at Linkwood, was that they operate the facility mainly computer controlled, but the operators still rely on their senses and measuring equipment in order to reach the desired cutting points, something we thought had been eliminated completely with the larger Diageo facilities, and refreshing to see this is still happening in a Diageo distillery of this scale.

Next stop: Glen Elgin distillery. Just like Linkwood, they have had an expansion recently, making them capable of producing 2,6 million litres per year. The expansion has resulted partly in a modernising of the plant, since they still run with a lot of wooden elevators to move the malt around and large wooden washbacks, but they do have a large full-lauter mash tun, where the second water is ramped up from 63 to 86 degrees Celcius, instead of using a third water, saving them the time it normally takes to fill third water into the mashtun. There are also still six large wooden wormtub condensers outside. Part of the operation is automated, but here we found a lot of manual work as well. Again; refreshing.

On to the last location of the four distilleries we are to visit today. Mannochmore and Glenlossie distilleries are effectively on the same location, where we started with the latter. A large stainless steel mashtun awaits us – also ramping up the temperature of the second water to gain time, which feeds eight wooden washbacks where a long, 80 hour fermentation takes place. Two more washbacks are planned to be installed, in order to raise the number of washes from 16 to 21/22 per week. The new washbacks will be made from stainless steel. The three sets of stills are all equipped purifiers, and are the last of the equipment in the distillery that are operated manually.

Last distillery of the day is Mannochmore. Here they also operate a large full-lauter mashtun – this time without an underback, but with a balancer, which – once more, speeds up the process. They have an even longer fermentation time as their neighbours have; around 100 hours. Because of this long fermentation time, they have expanded the old eight wooden washbacks with eight more stainless steel washbacks, that are situated outside the building. None of these washbacks have the usual switcher blades, which keep the froth from overflowing the vessels, instead – they use an odour-less and minute amount (measurable in millilitres per charge) of a soap-like liquid. The three sets of stills have been joined recently by a fourth set, where in all cases each spirit still can distil the contents of two wash stills.

The one thing we did not get to see this day, was the pot-ale and spent-lees refinery that is located down the road from the last two distilleries. Something they might fit in to the programme for next year’s event.

Summarising, it was a long and eventful day, where we got to find out – opposed to what we thought and had experienced earlier – the large conglomerate Diageo is not fully automated in all their distilleries (yet), and they are still investigating their plants as to what they can improve, or change the profile of their distillate.

After their recent focus towards lowering their carbon footprint in many distilleries, they are presently measuring their equipment from malt-mills to condensers, finding out step-by-step what makes their plants tick – as to speak. For example; full lauter mashtuns had been operating as semi-lauter for years, just because they had never bothered changing their routines, and at one distillery they “found out” that they could go from a grassy to a nutty profile only by changing the speed of the wort leaving the mashtun into the washbacks. They are only just starting with their investigations and measurements, changing Alchemy into science and knowledge, something we had thought they would already have mastered after 200+ years distilling.

Last, but not least (and we hope we are not breaking any non-disclosure agreements, although we have never signed any) we were shown a set of stills that was not entirely made of copper; the base of the still was made of stainless steel to the top of the fill level, having the fumes still tough copper all the way up through the lye arms and condensers. According to our limited knowledge, this is something that is illegal according the Scottish whisky rules – however as long as the result is not called single malt, and is used in blends, it should be fine. Diageo might have found a loop-hole in the law, reducing costs of production and extending the life of their stills. We’ll see what the future bring on that level.

An early dinner at the Laichmoray hotel was not the best idea concerning food we have ever had, but with a filled stomach we convinced Oliver to find our way towards the Craigellachie hotel, where we were promised a walk-in Jazz concert in the evening. The hotel had only just opened its doors after a intensive rebuild, and in the paint-fumes we had an entertaining time at the new, copper plated bar where we had a beer and a dram, and withstood one and a half song of “Barley, Stills, Mash & Tun” – not exactly our kind of music – and found shelter once more at the Higlander inn. That place really starts to feel like home.