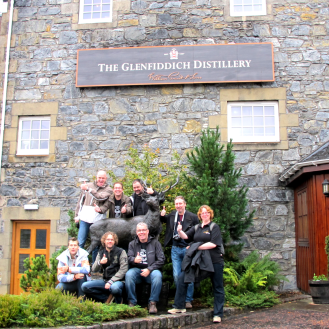 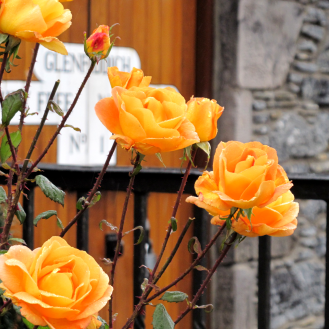 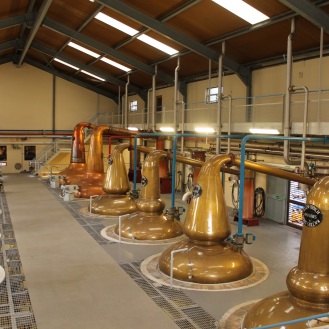 Thursday-morning, the weather was a bit grey and misty when we woke up. After a sturdy breakfast, we drove the small one and a half mile from the cottage to Balvenie Castle. It turned out the van had wipers, and we actually needed to turn them them on to keep our eyes on the road. Sadly, we were there out-of-season, so little further than the path up to the castle was next to impossible. Both the wet air and the absence of an open gate could not withhold us of enjoying the scenery and snapping some pictures before we would head down the hill to our first stop of the day: Glenfiddich.

Because we shortened our time at the castle, we were a bit early at the distillery so we decided to walk around the shop, take a group picture with the distillery-deer and report ourselves present for the pre-planned Explorers’ tour. Like all tours, the explorer’s tour starts with a short movie about the history of the distillery, and how it was built “by the Grant family’s own hands”. Incidentally, the Grant family is one of the last families in Scotland that owns and runs the distillery from the first moment in was founded. Gail, our lovely and knowledgeable tour guide, took the group around the whole process of milling, mashing and fermenting.

The big difference to the previous two days was the enormous size of it all. A duo of large, ten tonnes copper topped mash tuns were both in operation (for the first time during the trip) and in different phases of mashing. Via the 24 wooden washbacks, we were led into still-house number one with five sets of stills, where a set is a large wash-still and two – different shaped spirit stills, which are always put together at the end [which makes us wonder if they have ever tried to mature the outcome separately at some point, for the sake of “because we can” and curiosity].The second still-house had five wash and eight spirit stills, and at the moment we were there, the roof of the still-house was removed to add another three stills produced by Forsyths – only we forgot to ask which stills. A final note about the stills is that they are still fired by direct fire, and not steam. They believe this adds to the flavour of the end result. Not bad for the largest (14 million litres per annum) – single malt producer of Scotland…

After seeing the production lines, we were invited into warehouse no.1, where the workings and influences of wood was explained, before we continued to warehouse no. 8, where cameras and phones had to be left in a “special place” before walking in. This warehouse is the inner-sanctum of the marrying facility of the company. Everywhere you looked there were marrying tuns, in all thinkable sizes – all made from wood, Glenfiddich seems to be allergic to stainless steel. In this place, there is also made room for the solera system that the standard 15yo is created in, plus the (rather large) marrying tun it is kept in before bottling. It seems a pretty complex system to make a whisky in, but somehow, it just works. We got to find out that it works in the upcoming tasting, where we had a sample of the standard range of the 12yo, the 15yo, the 18yo and the 21yo. All good stuff, and a good bedding for lunch.

After all these impressions we were running a little late, and had less than an hour to grab some lunch for our next appointment at the Balvenie. The Maltbarn at the site of Glenfiddich offers a good great opportunity to eat, for a very affordable price tag and after telling we were in – sort of – a hurry, we were smack on time to get back into the car and drive the short distance to the Balvenie.Although Glenfiddich is the largest distillery in Scotland at this moment, they show their visitors they can make whisky as they have done for ages, and will continue doing so for a long time coming. This is one of the distilleries we keep coming back to. Do not count them out as a starter’s whisky, they simply aren’t.