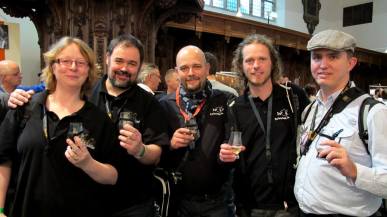 After having been introduced into the world of Jim Beam and being directed into drinking some rare old XXL niceties on the Saturday afternoon, the Saturday evening was open for us to step into the church and browse the tables, shake some hands, hug some friends and share a dram with people we just met for the first time. Whisky brings people together, and so does the largest whisky festival in the Netherlands.

We had been on time to order our tickets for this year’s session and the two masterclasses, and had decided that it would be wise to book a hotel, and go home on a relaxed pace on the Sunday afternoon.

These plans were disturbed when we were offered a chance to get tickets for the Sunday session – a disturbance we accepted with open arms, just more chance for us to take our time and linger a little longer with some of the stands and the people we met. People. There were many of these in the big church. For some it is a reason not to visit the festival any longer, as we have pointed out already at the start of the first post of this triptych (wow, there is a big word…). We ourselves had been in doubt for a long time, and when we were looking into the festival many moons ago, we were only convinced to go because of the presented masterclasses and meeting the people we only get to meet on festivals like this. If it were not for these prospects, we might have skipped a year, and saved the €45,- for the session’s entrance fee. Each.

Enough ranting, we had fun, and that is what counts, we would not have wanted to miss out. There were many drams to be tasted, some whisky books to purchase and some hats to try. This year, we had a small love affair with the stand of Whisky Import Nederland. David Roussier of the French Armorik whisky was present again, Peter Wills from Kilchoman had brought their latest releases, Blackadder and Càrn Mòr had some really (really) nice drams on the table, we had already met WhiskyJan earlier on the Saturday, Adelphi had some of their brilliant new make spirit with them (really promising stuff, that), Wemyss was represented by the lovely Ginny, and the Creative Whisky Company presented a brilliant young Lagavulin mystery dram. It seems we have spent hours at these tables (now, there is a truth) especially because we kept walking into Andy Hart – the Maltman, who kept pouring his wondrous expressions as if he had something to celebrate.

Spending our night at an hotel at walking distance, we slept in and sent a message to some fellow bloggers to meet at the pub opposite the venue before the event would kick off on the Sunday. Stefaan from Whisky with Friends was first to arrive with a couple of other Belgians just before Peter and Jeroen from Whisky Oss also arrived. After only a quick chat before we needed to claim our tickets and get inside and got to meet all of them again on the other side. No matter how many people are there, somehow you keep walking into each other. Plans to meet sometime soon again and share a dram were made and we are sure we will report about that when it happens.Other stands were well represented by people of the trade too – don’t get us wrong. We chatted a little with Tatsuya from Suntory, Lucy from Arran was tucked away in the corner with the very busy stand of van Wees, so we just waved to say hi and shared a dram of Arran’s new Bere Barley release (awesome!). Compass Box showed a good portion of their selection at Bresser and Timmer, just like Compass Box, Tomatin, the Irish Teeling Whisky Company, the Belgian Carolus, and many others. Diageo surprised us with one of the “new” Mortlachs and a gorgeous 36yo Convalmore – if you are into liquid winegums. At many tables we met the “usual suspects”, and generally speaking, everybody seemed to have a good time.

Yes, it was a busy and rather expensive trip again. From the moment we boarded the train to get to the festival to the moment we got off the train back home, we have been chatting with whisky lovers from just about all over the world. In our book the 15th edition of this festival was a success, including the small spelling mistake on the glass that made us enjoy the birthday dram – the Highland Park Ambassador’s Choice even more, even though we don’t speak Pirate.

Slainte Mhath, see you next year.

Pictures of the festival can be found here