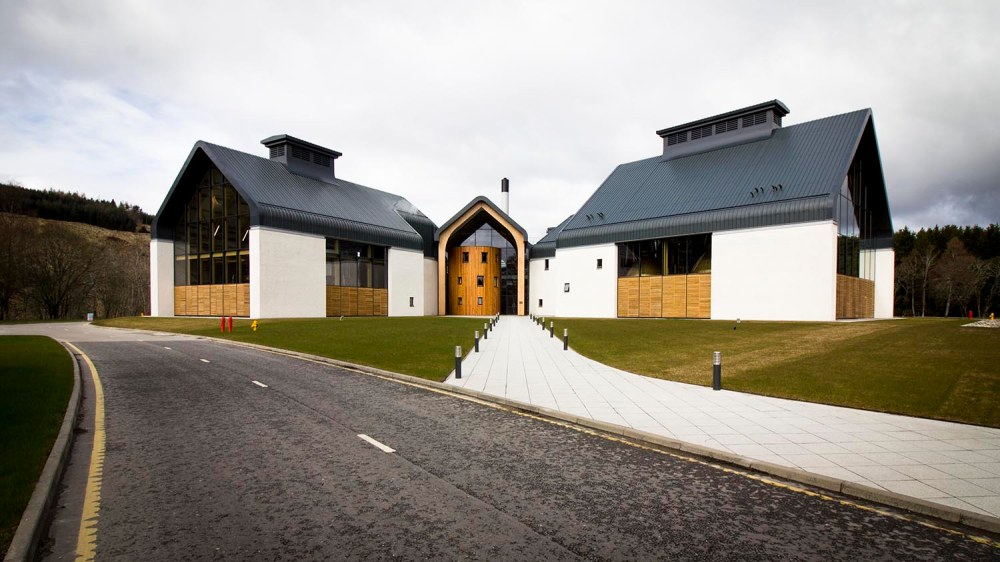 Pitlochry had been good to us overnight, so bright and early we drove up North to go to the Speyside region where we had made an appointment with Ann Miller and Trevor Buckley to be shown around Chivas Brothers / Pernod Ricard’s newest 24/7 and highly energy efficient distillery; Dalmunach.

Coming from Pitlochry, we used the easiest route following the A9 until we reached Granish and our GPS sent us towards the A95, with the river Spey greeting you on our right hand side every now and then. After enjoying the road for a while, we were given directions onto the B9102 at the first (and second) roundabout close to Grantown-on-Spey. Knowing the area a little, we decided to ignore the route we call “the squirrel route” and keep following the signs in direction of Keith.

The B9102 is a beautiful route to drive, but most of the track is single lane, there are many feòrag playing with their acorns in the middle of the road where lorries and tractors have a tendency to drive at their maximum speed while you are trying to avoid the next pothole cover, fallen branch or fawn that has not had its morning coffee yet and looks at the car as if it has never seen one before. Which may just be the case…

Anyway, at this second roundabout, firmly keeping all four wheels on the A95, we crossed the bridge over the river Spey which would now appear on our left hand side of the car. At some point, you will see the first signs of distilleries popping up and you know you are on the right track when you pass the beautiful church-like building of the Tormore distillery.

Keeping en route, passing the (invisible) Cragganmore, (very visible) Ballindalloch and (well signed) Glenfarclas distilleries, you will notice the sign pointing towards Carron and Dailuaine. Hit your brakes, turn left and keep following the unnamed road, passing the Dailuaine distillery, cross the river Spey again into Carron. When in doubt; follow the (remnants of the) train track / Speyside way, and you will eventually see the distillery site on your left from the village.

And a beautiful sight that is…

The new distillery is built on top of the Imperial distillery. Well, the old, in 1998 mothballed site was demolished in 2013 and from that rubble the Architects have created a feast for the eyes on the exact same location (Google maps shows in their history what the old site looked like, if you would like to see the old Imperial distillery). They have chosen not to keep the name Imperial, name it Imperial II or something similar, since the distillery is built from scratch where the architect was given a blank canvas, a £25 million budget and a build period from March 2013 to August 2014, where, after a series of test runs, in June 2015 the first official spirit ran through the hexagonal spirit safe.

The shape of the distillery is based on sheaves of barley, where each part of the process has its own sheaf, the left holding the five, 28 tonne malt bins, a modern Bühler 6 roller mill feeding six tonnes per hour mixed with water from the Ballintomb burn into the huge, 9.5m diameter, twelve tonne mashtun which washes into a clear and fruity wort 40 times per week. Behind the old wooden washback which holds the offices and canteen, the center sheaf houses the sixteen stainless steel washbacks, fermenting 60.000 litre wash for 54 hours with 300 litres Lallemand yeast. The right sheaf is equipped with the stillhouse with four sets of enormous 30.000 litre, externally steam-heated stills and the prettiest spirit safe you will ever have seen.

Building a new distillery instead of rebuilding the old one also has had the advantage of building it to present wishes and with modern technology. The stills have a modern heat-recovery system built in and they have constructed a waste and water treatment plant, which is able to make pallets of the draff, evaporate 42% extra moisture from the pot ale creating a solid, the water from the river Spey which is only used for cooling is cooled down and re-oxygenated so it is safe to return to the river, for the next distillery to use. All in all this makes the distillery 20% more efficient than a traditional distillery would have been. With 170.000 kWh per day, this is quite a saving on the energy bill. 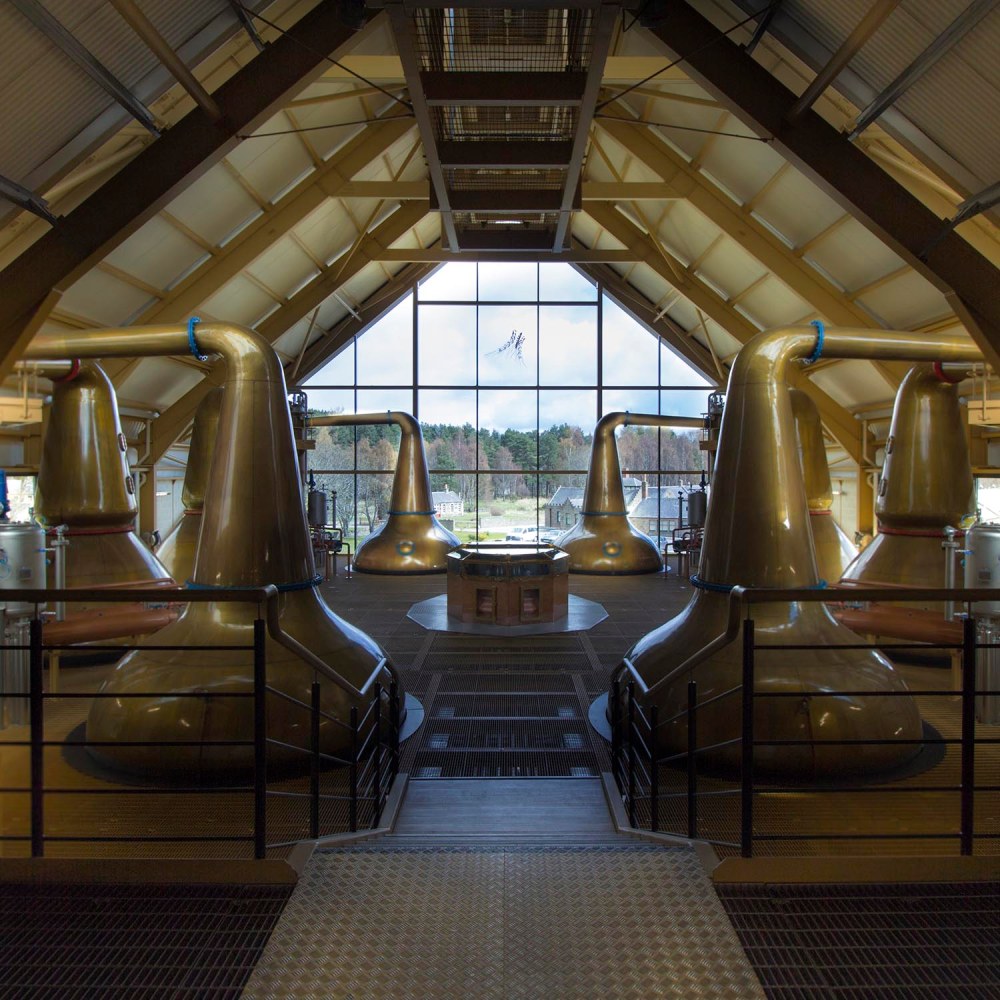 When entering the distillery, everywhere you look heritage of the old distillery and area can be found. In the central hall there is a red brick wall, reclaimed from the original millhouse. Built into this wall, the old fire and kiln doors can be seen and in front of the wall, the floor slabs are salvaged from a nearby farmhouse roof. In the mill house, the old Porteus mill sits in its original position but is no longer operational and replaced by its modern, more efficient Bühler cousin. The stills in the still house are the same shape as the still of the Imperial distillery, but twice the size, doubling the original capacity of the distillery to a whopping 10 million litres per year.

Right next to the distillery is the Speyside Way to be found, right where the old train tracks used to be, where many hikers walk their routes. The Speyside Way goes past many distilleries in the area, and we should walk it at some point to write a little something about it. On the other side of the distillery, in the river Spey, even more sporty people peddle their way past the distillery during their canoeing trip. It would be nice to open the distillery for visitors, have a coffee shop for the hikers and canoers and share the beauty of the location in the lush pine forest with more people than only the handful of people working there or the lorry drivers that come tanker away the 200.000 litres of spirit every week. Since the warehouses and old office buildings of the Imperial distillery are still on-site but empty, this could be an excellent location for that. 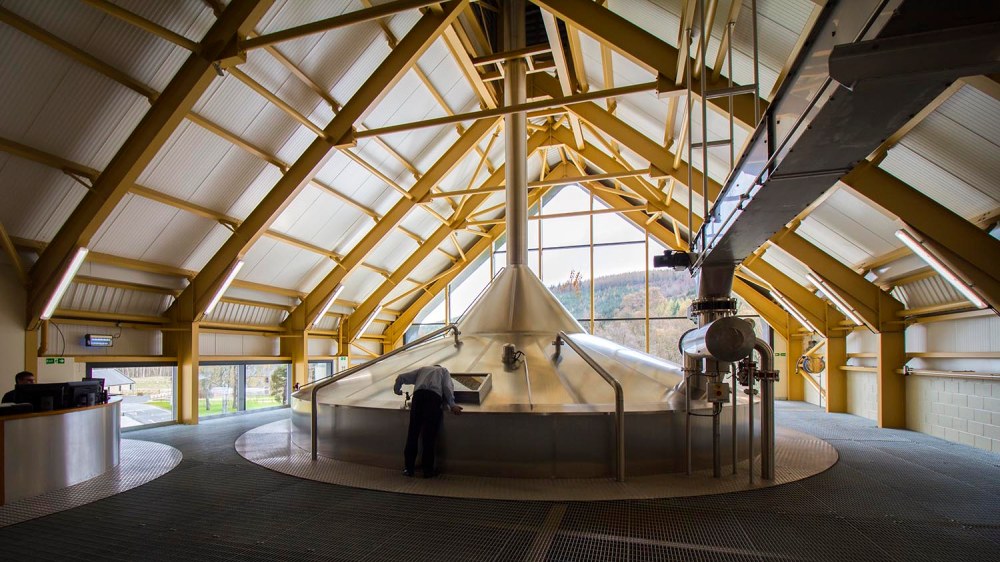 Many thanks to Chivas Brothers who have made it possible for us to visit. We had a great time, picked up our jaws several times from amazement and were able to have a taste at the brilliant new make (here and here).

More pictures of the distillery can be found via our Facebook page.