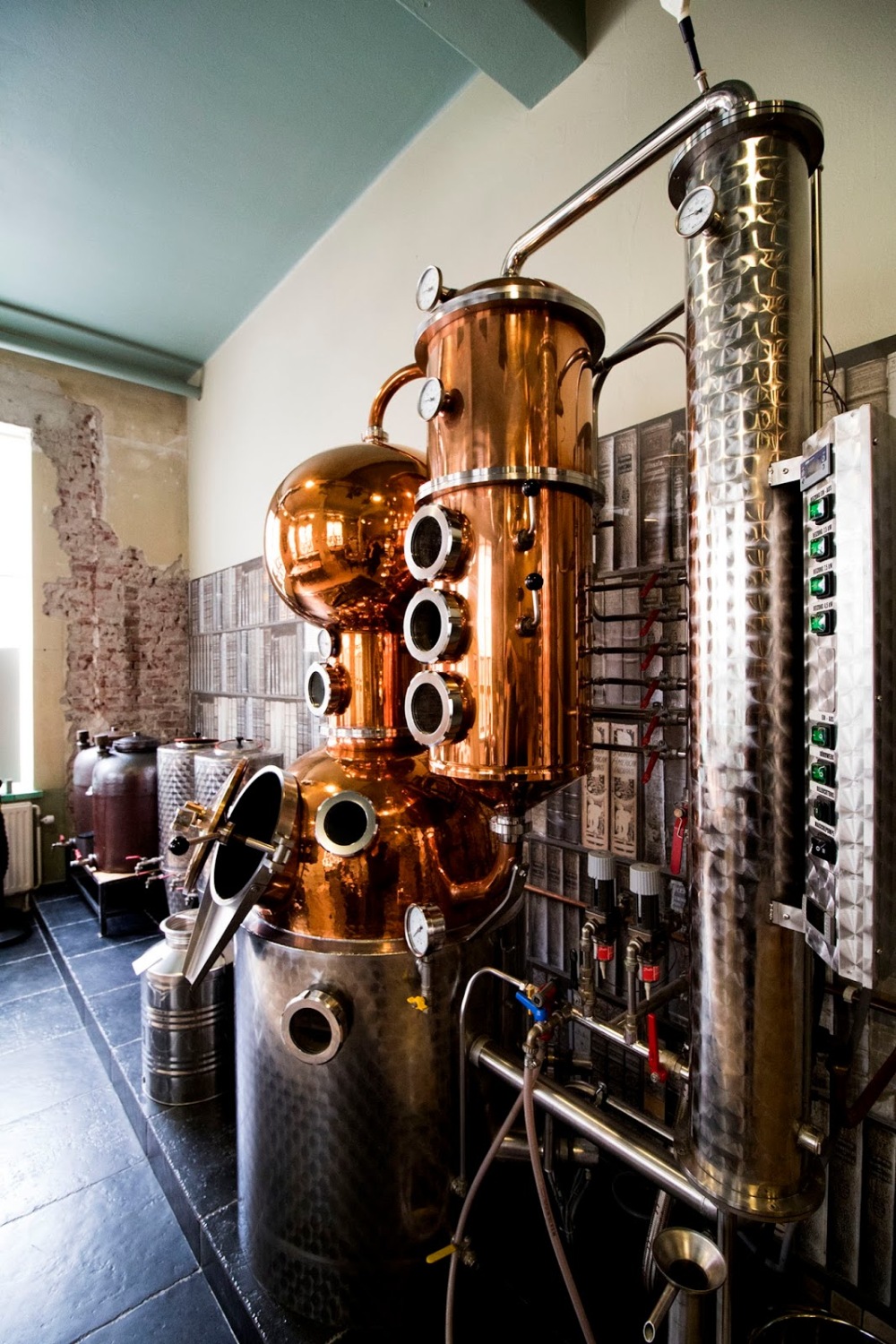 In the Eastern parts of the Netherlands we have seen many distilleries surfacing recently. We have visited the distilleries in Vroomshoop and Deventer already, and after another two hour drive on the A1 heading east, we return to the Province Overijssel, in the region called Twente. This time we are here to visit the small town of Ootmarsum, close to the German borders. In an former monastery – originally built by a rich wine merchant for his daughters destined to serve the Lord (times sure were different in the 1850’s), the Sculte distillery is built in between a variation of different small local businesses. Having parked our car during a typical Dutch cloudburst, we quickly walked towards the distillery where founder Gerard Velthuis awaited us with a welcome cup of coffee.

Gerard comes from an advertisement and design background and was looking for something different to do with his retirement around the corner. While traveling around his beloved Austria, he had visited many small fruit distillers over the years and had been helping some of them occasionally. Interested in the possibilities while having followed several courses, he purchased a small Austrian still in 2004 and fired it up in the back of his farmhouse in Mander, a stone’s throw away from Ootmarsum where he grew up. Not long after, customs and excise were knocking on the door, and if it were not for his daughter Evelien, he might have thrown away the little still and give up altogether. Together, they worked through the hassle of regulations and paperwork, and obtained the necessary licenses so he could continue and expand his new found passion. New, more serious equipment was purchased and the “Erve Sculte” company (after the name of his farmhouse) was started with father and daughter at the helm, transferring the design and advertising company to his son, Henk.

Still going back to Austria on as many occasions he gets, he learned more about the craft of distilling fruit from his vast network of people in the trade, he collected the best tips and tricks from each of them, and incorporated this into his own processes. The distilling bug was now firmly set with Gerard, starting with the distillation of high quality apples and pears, he knew from the get go that some of his product should mature in wood, preferring oak from his own neighbourhood. When looking for a cooper to do this he stumbled into some difficulties in the Netherlands and turned back to his Austrian network again to get it done.

After a lot of experimenting with his products, some matured, some straight from the still, but all of them following his main motto of putting quality first above all else, it takes him to 2011 to finally get convinced to enter one of his products into the Destillata competition in – once again – Austria. Not expecting much of it, he was surprised to get a call at some point of one of his Austrian friends informing why he was not present at the award ceremonies: he had hit a home-run and won Gold. The year after: more gold, plus the “Edelbrand des Jahres” – Distillate of the Year. In 2014 he entered once more, but now with his first batch of Twentse Whisky; more gold in Austria and silver from the prestigious International Spirits Challenge in London.

Ho there, how did we get from apple and pear distillates to whisky? That looks to be two completely different worlds, right? Not knowing anything about whisky, he decided to educate himself and called for help from people in the industry. Meeting the right people, he found himself behind the scenes at the Glenfiddich and Daftmill distilleries to get a better understanding of what the differences are. Where there is a yield of about two litres on every 100 kilograms of fruit and a lot of tweaking, several cutting points and carefully keeping an eye on every step of the process, whisky “only” has a two step distillation process where only the second distillate has two cutting points and a broad heart of the spirit run.

Not to downplay making whisky, the process before the distillation is of much more importance as it is with fruit. Fermenting fruit depends on the quality of the fruit, the amount and species of yeast, and the long (about 14 days) fermentation time. With whisky, we know the grain variety, how it is (or isn’t) malted and with (or without) which type of peat, the coarseness of milling the grains has an effect in the mash tun in a later step, the amount and species of the yeasts have a lot of influence, just as the duration of fermentation. Selecting a cutting point during distillation depends more or less on knowledge and experience from Gerard and the new addition to their team, Roy Kroeze, and once there is a set formula, they are most likely safe for the next batch too.

At Sculte (they lost the “Erven” part when moving to their current location in Ootmarsum), they purchase 1400 kilograms of malted barley from their Maltster in Germany, which is crushed in small batches and mashed in their 500 litre Braumeister brewing kettle. A brewing kettle rather than a mash tun, where the temperature during mashing and lautering can be controlled, so the clear wort is at the correct temperature when it is transported into the washbacks. These are currently the plastic containers, but will soon be replaced by stainless steel fermenters. After fermenting for four days with a variety of yeasts for flavour, the wash is transferred in small amounts into the 110 litre Austrian pot / column still set – which will soon be accompanied by a 250 litre sister set. Everything gets processed in very small quantities, so the results are also only a handful of bottles if they were to bottle immediately. After a couple of runs, the collected (grain) spirits are put into either a 55, 100 or 225 litre new cask of their own oaks or ex-Bourbon casks depending on the distillate and desired product. Their casks are stored in the back of the old monastery, in a room with a grated but open window, allowing the weather to come in and influence the temperature, as we recognize from the dunnage-style warehouses in Scotland. No earthen floors though, so the similarity ends there.

In their range of products they have a whisky, a selection of different fruit distillates, jenevers, a beer distillate and a gin, made with onions. That’s right, onions. Ootmarsum and the surrounding villages are known for the production of potatoes and onions, so when looking for a good recipe, they decided to give it a try, resulting in a surprisingly fresh and herbal gin, with a long-lasting finish. None of their products are chill-filtered, nor is any colouring or sugars added to the recipes. Their non-fruit spirits are entirely created in-house from a barley base, not buying-in any neutral grain spirits. Their desire for quality and their wish to know the origin of their products drives them to put high quality on the first place, far before quantity. This drive for quality also shows when we are trying some of their distillates, where we got to taste a really nice herbal infused barley distillate, enriched with local honey. Nothing wrong with it, we could already see it in their little shop as a mede without any problem, were it not that they agreed not to add sugar, and honey – locally produced and of high quality or not, is a sugar rich sweetener first, so Gerard, Evelien and distiller Roy eventually decided not to bottle.

A while back, we have tasted the nearly three year old Sculte Twentse Whisky, and both of us were undecided when we tasted it. Clearly, there is a solid product, but we were both convinced the new wood had been a bit harsh on the spirit, making it quite unbalanced. Having tasted their second batch in their tasting room and some of their 50ppm peated single malt spirit (they have acquired a small batch of peated barley from an undisclosed source in Scotland), we were pleasantly surprised by what we tasted.

After talking about fruit, grains, potatoes and onions for most of the morning and a good part of the afternoon, we said our goodbyes, got some of the distillery products in the back of the car to make some tasting notes back home and decided to look for some of the local treats and have a look at the many art shops and sculptures in the village. Good times.

As usual, following us on Facebook will grant you access to a lot of pictures of our trips and distillery visits. On our tasting notes blogs, you will stay informed of our opinions about the different whiskies and other spirits we regularly taste.