In our most recent stories, we have been talking about our travels to distilleries in the Speyside region, the Orkney Islands, the Kingdom of Fife and have made another side-step into our own country to talk about another passionate Dutch distiller. Starting from today, the next couple of weeks we will tell you about where we have been in the northernmost parts of the Scottish mainland, slowly trickling down until we have reached Inverness, and go yet another direction. Coming from the ferry terminal in Scrabster, we took the easy route following the A9, to get to the five kilometres long trip to our next destination. We could have taken a right turn in Thurso’s “city center” and follow the wind along the coast until we would have reached Ullapool starting at the A836, which must be a magical route. Whenever we go there, you will be among the first to read about that. But, left turn it was, and before the car was even getting warm and willing to drive, we stopped at the Henderson business park where a collection of (very) indistinct buildings should hold the Wolfburn distillery.

We started opening a random door where someone inside spotted us and amiably invited us in, while the shiny stills had already indicated us we had definitely opened the door to a distillery. We introduced ourselves and were asked to wait, because the remainder of the group had still to arrive. Remember the 22 Danes from our trip to Highland Park’s Hobbister peat bogs? Well, them. We had already said hello on the ferry over some much much needed coffee because of the crazy hour, but only came to realise we would meet up again at the distillery when the math (and the coffee) kicked in.

While they were still to arrive, we had some time to have a look around and take a some snapshots inside the spacious, modern distillery, built on the banks of the Wolf Burn – the water source giving the area and the distillery its name. Fun fact; in the beginning of the 1800’s, the area housed about eight distilleries, one of which was also called Wolfburn, took water from the same burn and was most likely of similar capacity as they have come to build on this location in 2011, thus resurrecting the Spirit of the North. A building project without much delay but with proper planning, so that where there was nothing to see until August 2012, a number of concrete and corrugated steel-plated industrial sheds were built, facilitating a storage and bottling plant, warehousing and a fully operational distillery flowing its first spirit on the 25th of January, 2013.

The inside of the distillery building breathes Forsyths of Rothes, who once more have delivered an outstanding job, building a contemporary-traditional distillery. The processes are clearly labelled, in a logical order, connected through a maze of grated stairs, floors and elevated pathways. The proud wolf sign above the office door (inside, because there were a little too many random visitors at first), confirms we are at the correct distillery. A small, two man team with a combined 40 years of experience gained through hard work at several Diageo and Pernod Ricard distilleries, operates the finely tuned equipment. They have already started to train the next brewing and distilling generation with two local lads, to make sure they can take their holidays too in the near future the distillery is ready for the future, and the crafts from milling to bottling stay alive and on-site, as we see with many of the recently built, smaller distilleries.

Upon entering the spacious building, on our left behind the small office, we find a pair of 18 tonne malt bins. In the first one-and-a-half year of operation, they have been stocking and distilling unpeated barley, until they purchased a batch of 10ppm east-coast peated barley. Six times a week, the conveyer system salvaged from the demolished Caperdonich distillery, delivers 1.1 tonne of malt to the tiny 4-roller malt mill. The resulting grist is mixed in the copper domed semi-lauter mashtun with a total of 5.000 litre water from the two humongous water tanks in the back of the distillery – also reclaimed from Caperdonich, where they operated as washbacks. After a five hour mash, one of the four 9.000 litres capacity stainless steel washbacks is slowly filled with the clear wort, which gets aggravated by 5 kilos of dried Anchor yeast, getting to do their important job for the next 67 to 93 hours, to create the much needed alcohol.

Appreciating the shape and modest size of the two stills at the other end of the walkbridge, we start to feel their heat as we slowly walk closer. The 5.500 litres wash still, powered by steam coils, takes about three and a half to four hours to run one whole washback through the slightly downward angled lye arms and shell-and-tube condensers, and create about 3.000 litres of low-wines to charge the 3.800 litre spirit still with. Also steam coiled, the spirit still runs for ten minutes until circa 74% alcohol is reached, after which the lever in the spirit safe is turned to catch the heart of the run. Just under two hours later when 62% is reached, the lever is turned back to allow another two hours to completely drain the still. Currently, this results in 3.500 litres of alcohol per week. 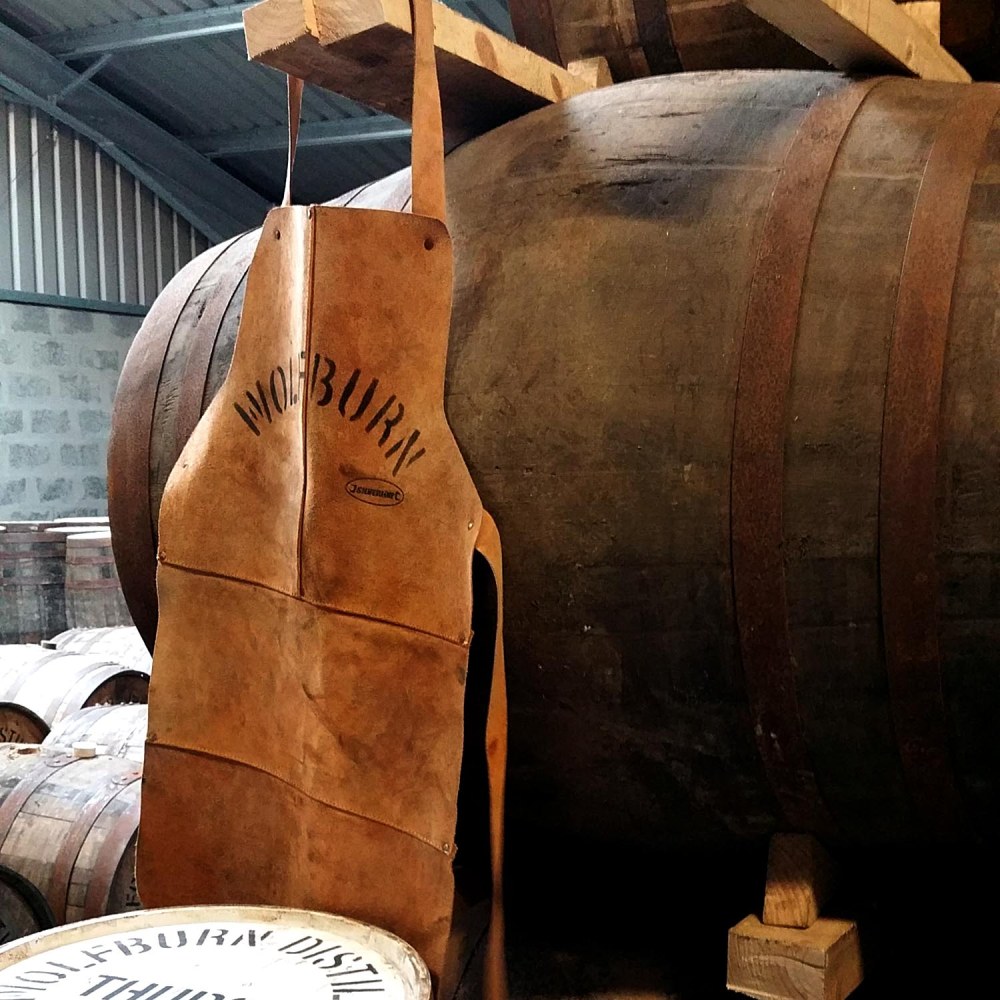 Next door, on the right of the distillery building, a set of three warehouses has been built, where the alcohol is collected and filled into casks, to further mature in a traditional, dunnage style warehouse. Considering the metal walls and roof, it was surprisingly cool inside, although it needs to be said that when we visited it wasn’t a typically warm day (rather; a typical Scottish day). A number of ex-Bourbon and ex-Sherry casks have recently been filled with their spirit, but we could still see a lot of 2nd fill quarter casks laying around, from which their first release has been bottled.

Having tasted their spirit, their first three year old release and their experimental peated spirit, we are impressed by what they are currently creating and already putting on the market. Allegedly creating the spirit they wanted from the very first spirit run and sticking to that recipe, adding a beautiful peated variant, “all” they have to do now is keep doing what they do, have enough patience to wait until the next batches are ready to be bottled, whilst moving the pallets with the empty bottles and labels from the distillery building to the bottling plant, to make room for an extra set of washbacks and stills, and increase their annual capacity. Looking at the size of the two 57.000 litres water-tanks and the amount of space they still have in the distillery building, they already anticipated on an expansion when they started the build. Good thinking.

Next week, we’ll continue our trip in the Northern most parts of Scotland, and while we now recuperate from another eventful Maltstock, you can enjoy a number of pictures from that event on all of the social media channels, or have another look at one of our previous road trips on our site. Alternatively, you can gather all the bits and pieces of the Caperdonich distillery. We have found a sum of equipment up here at the Wolfburn distillery, encountered the old Porteus mill at the Annandale distillery in the Lowlands, know one set of stills to be in Belgium with the Owl distillery, whilst the second set of stills is rumoured to be put back to work at the newly built Falkirk distillery*.

*We are in no way endorsing molesting, theft or fencing, but merely want to point out the economic foundation of the Scots, the Forsyths family in particular.