As can be seen in the first part, we had developed a serious taste for everything whisky: Distilleries (breweries too), festivals, nosings & tastings, whisky specialist shops and not in the least of all, Scotland. Although we were well aware that besides Scotland there are many more whisky producing countries, Scotland stole our hearts. Among the whisky producing countries is our own country where we visited the two larger of the distilleries: the Us Heit brewery where the Frysk Hynder is created and the Zuidam distillery where among many liquors the Millstone whisky is produced.

With our southern neighbours in Belgium, we tried our luck with the Filliers and Belgian Owl distilleries; where the last one has recently gone through a mayor rebuilt where they have installed the old stills from the closed Caperdonich distillery. Reason enough to please ourselves with a new visit someday soon, in order to see what has changed and what the new new make spirit will taste like.

Besides visiting local-ish brewers and distillers, we also changed our way of visiting festivals. Where Thomas had started to go once a year with a friend had already grown into a group of friends and two festivals a year. Ansgar liked the first smaller festival we visited together a lot, and in the start of 2013, every month was filled with at least one whisky-event; a tasting, a festival or distillery visit. You name it, we were there. By chance Ansgar joined the annual “man getaway” where the plans for some of us to go to Maltstock were reborn and got firm ground – 2013 would be the year for our Maltstock-deflowering…

As already mentioned, our hearts are stolen by Scotland, and we just had to go back. The second trip to Scotland was meant to be a little more down to earth, less distilleries and more time for us.
We had planned our first week of the vacation on the Isle of Islay again – but this year we would go during the world famous Feis Ile, Islay’s festival of music and spirit, after which we would relax a whole week and come to ourselves on the island of Arran, which has “only” one distillery bearing the same name as the Island. A third (half) week would finalise the trip in the southern part of Scotland, in the village of Wigtown, where the Bladnoch distillery opens their doors to the public every now and again. The village itself is one of the many book-towns of Scotland, and avid book readers as we are; we expected to find some of the hard to find books about whisky we were still missing in our modest book collection.

The Friday before the vacation was business as usual, last day of work before the weekend, the Monday would be a bank holiday, and the Thursday we would be on the boat to Scotland. Driving to work, our car was hit on a roundabout. Someone had overlooked our car (and a black Renault Laguna is not a small car), resulting in our car not having the backside the designers would originally have had in mind. Our first thoughts were: “Oh shit, we are going to Scotland in a couple of days” via “Ehrm… Monday is a bank holiday”, “What would a rental-car cost us for three weeks?” to “How the fuck could she not have seen this big ass car?”

Luckily nobody was hurt and the insurance company did what they are (generously) paid for each month. Kudos for the car-repair company for fixing our car within two and a half days (they don’t work weekends and remember; Monday was a bank holiday), on Wednesday afternoon we could pick up our car – without the necessary paint on some of the critical places but with the guarantee we could safely go on our much deserved and anticipated holiday. Needless to say, we slept well the night before the trip.

The night on the boat was a little different. “Rough” does not completely describe it; we have seen waves coming (much) higher as the boat was tall, and with one of us not entirely comfortable with moving objects, it was not a pretty sight. Instead of landing the boat around nine in the morning, we landed around two. No biggie, but the planned visit to Auchentoshan would have to wait another year. Another, because on our first trip we had missed an exit, had taken an exit early or had just overlooked the sign that said “this direction for Auchentoshan distillery” altogether… 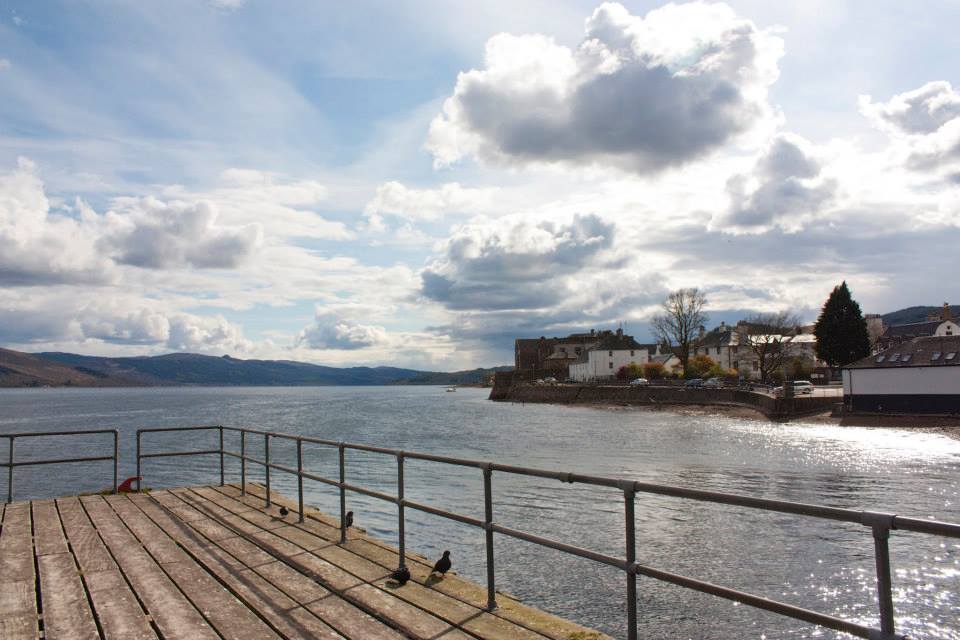 The planned stop in Inveraray was as expected, albeit that the room at the George hotel was slightly more luxurious than anticipated, so the car trouble and roller-coaster ride were easily forgotten and we celebrated the first evening in a large Jacuzzi, enjoying a dram of Auchentoshan we found across the street in the sweetest little whisky shop ever, guided by the live music playing underneath our bath- and bedroom window. The humongous bed welcomed both of us and before we knew it – and without revealing any details, we were fast asleep, the night before long forgotten. Life is good.

Okay, this did not tell the details about our trip to Islay, but the next part will. Promise.