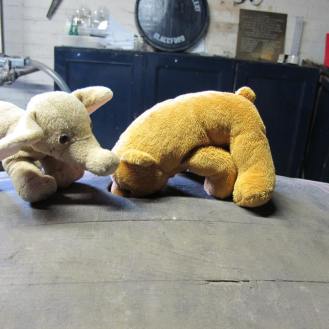 It was time to say goodbye to Linda, Graham and Johanne. Two weeks had gone bye so fast, while we were still having so much fun getting to know each other when staying with them in Speyside. After exchanging some hugs we took off before we all would break down in tears, apparently we are not good in goodbyes from people we have a good connection with – lets leave it to that. Driving from Craigellachie to Dufftown and then in the direction of Tomintoul following the A939 and eventually the B976 to the Royal Lochnagar Distillery is quite a beautiful ride. We wanted to do this drive in 2012 also but were warned by some locals that the road was still icy and snowy, so we passed back then. Having heard about this great route through Cairngorms National Park we knew we just had to try when we were in the area again.

It was a stunning and amazing route, and we were glad it had not been snowing earlier in the week. Here and there were some patches of snow and we passed two actual snow elevators, although they were not really in business. The highest point we saw on the GPS was 1940 feet (close to 600 meters), but the roads there are winding through the mountains, going straight up at one point, dropping down to sea level again (well almost) around the next corner. It is not a busy road, so keeping our own pace, we arrived completely tranquil at the Lochnachar distillery about fifteen minuted before opening.

When entering the visitors center we were welcomed by Gordon Muir who we met earlier at Dutch Whisky Festival WFNN, and when visiting Glenglassaugh the week before, when he was in the presence of the Henk en Miranda – two of the forces behind that festival. We were once more amazed about how small the world really is, meeting people every turn we make.

Gordon, in his official capacity as a tour guide – his ‘other’ job, took us around the distillery and we had a good look around in the little distillery, together with only two other visitors. Except for some activity in the washbacks the distillery does not produce on Saturdays, so we were able to take some photographs and get a little closer to some of the machinery as we are used to by most Diageo distilleries. The distillery is deliberately kept running without any automation, in order to keep the craft of the trade known and tangible for the new generation of Diageo employees. For “training purposes” there is a cask of every Diageo distillery present in one of the small warehouses, but we did not get any further then smelling the mature spirit straight from the cask.

After the tour we said our goodbyes to Gordon, with the promise that we would come back to the distillery some day. An easy promise to keep, because we decided at this point not to stop and visit the nearby Balmoral Castle and cruise on over the A93, direction Breamar, through Perth, where the A93 was just absorbed by the A9. Following this A9, at an unexpected location, we found the Tullibardine distillery, in the midst of a shopping centre, where we stretched our legs and ate a little something.

Entering the spacious visitors centre with a properly sized bar in the back, we expected a good experience, and were a little surprised by the knowledge of the tour guide – or the lack of it. Whisky-geeks as we are, we usually ask many questions, and expect a different answer than “malted”, when we ask about the type of barley that is used. It is a nice little tour, and we learned that the older Tullibardines on the market are from a different owner as the current, young, mostly finished spirit that is sold at the moment. Promising, but not our cup of tea. “Here is a quarter, give us a call when you are 18”.

This was the last distillery of our trip, and our 55th distillery in total. With all these different distilleries we have some favourites, some we want to visit again (or already have). If you are keeping track of favourites and recommendable visits, there are always lesser favourites and the ones you rather not recommend, and the Tullibardine is one of then. The location at the shopping centre is a bit strange, the distillery itself seemed okay, but the provided information could be quite a bit accurate. That we find the whisky not to be ‘ready’ yet is besides the point, and something that is only our opinion.

Our last stop in Scotland was to be the lovely Tormaukin Hotel, where we ended up after going up the A9 for a little, back in direction of Perth and following the A823. We had a really good dinner at the hotel, and tired from all impressions and emotions that the last two weeks of Scotland gave us, we turned in early even when it was still light outside.

Sunday morning, we drove the last 250-something kilometres at an easy pace, saw some bits of Edinburgh in the distance, and took the coastal route back down to Newcastle where the ferry was already waiting for us, to go back to the Netherlands. Spoiling ourselves one last time, we upgraded the cabin and enjoyed a smooth ride to Ijmuiden.

Our next trip to Scotland is already planned, and in the meantime we will report on everything whisky we will encounter in our explorations. Thank you all for travelling with us thus far.