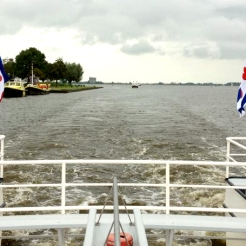 In the Dutch whisky community we had previously heard of an event called Whisky Afloat, organised by Bennie, Gerda and John. It is of a gathering of whisky enthusiasts spending the day on a boat, cruising the Frisian lakes, whilst sharing a collection of whiskies and having a good time together, concluded with a BBQ at the end of the day.

This sounds like fun doesn’t it? Well it certainly was! After a bit of a silent season without any festivals, tastings or big meetings with any of the people from the Dutch whisky scene, to us this felt a bit like the kick off of the new whisky-season. After this there will be a couple of festivals and gatherings planned. So much to look forward to!

Back to the event at hand, Whisky Afloat is an annual event and now being held for a couple of times, and the group of participants is about 30 people, not too big, but big enough. It was good to have some time to talk to people and catch up. As the new kids on the block we felt we were welcomed with open arms in the group that knows each other for many years. It was just relaxed and fun.

After arriving in Terherne we were welcomed by the organizing committee. First and most important action was setting up the tent for the night while we were still sober. When everyone had arrived, there was the choice to walk the 10 minute walk to the harbour, or use a small boat. We decided on walking.

The weather was looking a bit grey, but we did not let that spoil the fun. With all of us on board, everybody put their whisky they wanted to share on the table and the sharing and fun began. The boat had a four to five hour route planned that took us across many lovely spots and through villages. Good conversations, laughs and whisky were shared during that time.

After arriving back in Terherne a couple of the men got out their fishing gear while the BBQ was started up. The night was filled with more whisky, conversations, fun and good food. It was great to see lots of people again and meet other whisky enthusiasts. A great bunch together.

The night was – as expected – too short for many of us but was instantly forgotten when breakfast was presented with good coffee, bacon and eggs, while some of the men started their day whipping out their fishing gear again. Slowly everybody got ready to go home, packed up the tents, and plans were agreed on to meet again. Many of them we are going to meet at Maltstock soon, where there will be a weekend filled with more whisky fun. Whisky Afloat 2014 was our first time, and hopefully not the last.