The most southern Scottish distillery is located in Bladnoch. The Bladnoch distillery lies directly next to the river baring the same name. It was established in 1817 by the brothers Thomas and John McClelland. They exchange hands a couple of times, and stopped production at one time also. Then in 1993 the owners United Distillers mothballs Bladnoch Distillery. But the year later Raymond Armstrong from Northern Ireland buys it, with the note attached that he could not run production. In 2000 he came to an agreement with Diagio (former United Distillers) that he could start production once again.

In some books you find about this distillery that they do not run a full operational distillery due to the high production costs. We understood that is was the plan to run a full production by now, but due to some trouble some where there seems to be something standing that in the way. At the most they are running production now for a couple of weeks per year, mostly between november/december.

Walking through the distillery you find that it all has a bit deserted feel to it. They keep the place maintained for the production that they run, but you can see that the place needs a bit of love, and then it will be a great place. It has a good feel to it, and is a lovely location. It has a great potential to shine, and the whisky is very nice. We really hope that they get to do something more here, to give it back some former glory and shine… Bit of TLC…

It has about 11 warehouses on site, and most of them are rented out to other distilleries, what gives them some rent fees. They are selling parts of the old stock what was in the warehouses before the purchase, and parts of what they have distilled after.

They have a very nice shop, and some lovely cats running around, with names like Malt and Barley. One of them just kept on following us during the tour. Lovely animals, think they have a great life here, just roaming and guarding the premisses of the distillery…

The distillery is next to the river Bladnoch, and behind the distillery is a very nice garden, where you can walk around, and also take a walk down the river from there, or have a picknick in the grass. The setting is very pittoresque.

The tour started with a short introduction the making of whisky, and what the history was of the distillery. Unfortunately photographs were not allowed inside the distillery, so we took the liberty to grab some of their website so I could give you a look “inside” the distillery what they cal them selfs ‘Spirit of the Lowlands’.

Out tour guide Sarah told us that they get the barley from Greencore Maltings near Dundee, and have the casks in the warehouses for a minimum of 9 to 10 years before bottling. All the produced spirit will go into single malts and blends.

At the distillery grounds you will find also an old cooperage so they could make their own casks. This is sadly not any more, and they purchase the casks elsewhere. They mostly use sherry butts and first fill bourbon barrels.

We had a look in the old buildings were the maltings floors and kiln used to be. This is not used in about 100 years she told us. The water is used from the river Bladnoch, running beside the distillery. They produce mainly unpeated malt, but once in a while the make some peated, with a 18 ppm to it.

For production they have a Bobby mill, a 5 tonnes stainless steel semi-lauter mash tun, six Oregon pine wash backs (of those three in use), a spirit still of 10.000 liters and a wash still of 13.500 liters. Fermentation time is about the 72 hours here.

The lye arm of the wash still has a bit more descending in it then the spirit still, that is almost straight… They use no chill filtration and no artificial colouring for their products.

The tour took us around the beautiful place, and ended in the dramming room, next to the shop so we could enjoy one of their expressions. After a good tour and looking around the shop it was time for some refreshments in the Bladnoch Inn on the other side of the road, very convenient must say…

Below some pictures as said we took from the website of the Bladnoch Distillery, to have a look inside also. Nice little town, and when there you can also have a visit to Wigtown, just 5 minutes up the road, Scotland’s national book town, and have a browse around there also… Or have a drive up to the lovely coast, so enough to see and do…

We took some off their bottling’s home with us, so we could have a proper taste when back, so more tasting notes will follow soon… 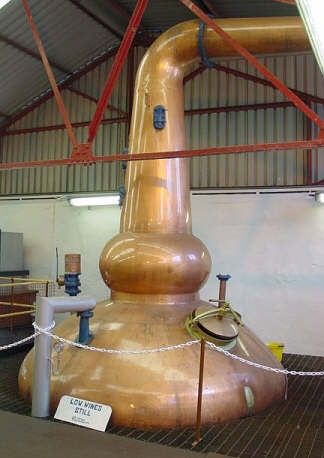