In last week’s article, we told you about what we have experienced with Irish Distillers’ Method and Madness brand launch in Dublin, the Q&A tasting the next morning and the visit to the archives and micro distillery with all their mad ideas in Midleton. Having some spare time before our plane would bring us back to Amsterdam on the second morning, we decided to see what would happen as a regular visitor at the Jameson Experience in Midleton. 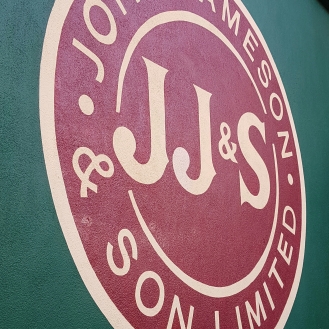 In the mid 1960’s, Irish whiskey had an uncertain future after American Prohibition and the several wars so the three surviving republic distilleries – John Jameson & Son, John Powers & Son and the Cork Distillery Company, decided on a merger into Irish Distillers. They first continued their individual operations in Bow street and John’s Lane in Dublin, while they built a new plant next to the Cork distillers’ operation in Midleton, a location with much more space to combine their activities.

In 1975, the new distillery was ready to take over production of all three plants, and they eventually shut down the old locations. The buildings of the Powers plant in John’ s Lane were sold and most were demolished or incorporated into the National College of Art and Design. The Jameson distillery at Bow Street was turned into a museum, offering tours and tastings and has recently been revamped to guide the large amount of annual visitors. An experience we will have to come back for at some point, because we are now at the third location – the Old Midleton distillery, originally producing Paddy’s whiskey and Cork Dry Gin, amongst other brands.

THE OLD MIDLETON DISTILLERY
Coming from the north, following the M8 to Cork, we take the first exit on the roundabout in direction of Rosslare/Waterford onto the N25, until we reach the Midleton exit from where we can easily follow the brown sings to the Midleton distillery. Upon arrival, driving through the gates, we are greeted by an old still (which looks to be one of the old John’s Lane stills) in front of an old malting floors, which are converted into the visitor’s centre. After sorting out our tickets, we decided on a cup of coffee in the Malt House Restaurant, before we were gathered by our guide to start the tour with a short video about the history of the company in the screening room, one of the old kilns. After the short presentation, we are guided into the next building holding another of the old kilns, which looks to be abandoned yesterday and could be started at any moment, which would be a great addition to the micro distillery we will visit later in the tour – just thinking out loud here. 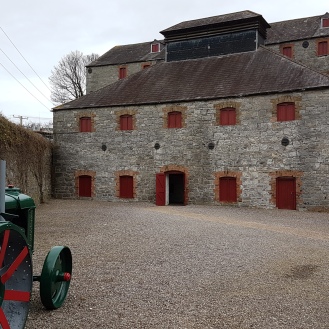 The path we follow zig-zags through the low hanging ceilings and small rooms, eventually lead into one of the old grain storage warehouses, an immensely large stone building with many rooms and wooden floors, which used to hold the vast amounts of grain until 1975. Mannequins of workers and one of the distillery cats (who were on the payroll, just as the workers) are displayed, accompanied by the sound of scraping wooden spades, continuously turning the grains to prevent the buildup of heat. Exiting the building, enjoying the dry spell and the bit of sunshine, the guide points out the steel beam-ends preventing the buildings from bursting whenever they were packed with grain.

Logically, the next room is the mill room, powered by the beautiful 6.6 meter cast-iron Fairbairn water wheel turning multiple pairs of millstones. Whenever the Dungourney River would run too low to power the water wheel, a stationary beam engine was installed to help out and keep the large operation eh… operational. The water from the river also supplied the large amounts of water needed for production throughout the distillery, including the numerous mash tuns in the other room, which in turn used to feed the large wooden washbacks. 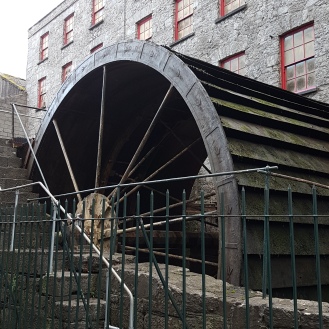 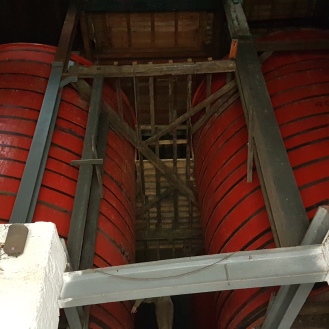 Another water consuming vessel is the 40 feet (over 12 meter) diameter wormtub, housing the several worms from the stills found in the next buildings, in the one tub. The three huge pot stills date back to 1825. The big wash still alone, with a capacity of a whopping 143.872 litres, consumed four tonnes of coal every 24 hours – we can only imagine the amount of labour that would have been involved making the three pot stills and the Coffey’s Patent still operate. If we close our eyes standing in the central square, we can hear the hammering sounds coming from the cooperage, smell the smoke coming from the chimney in the centre and listen to the barrels being rolled into their place in the attached warehouses, a cacophony of sounds produced by 200 workers which nowadays are absent from the square. 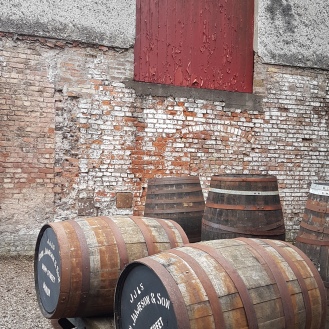 We briefly visited a small warehouse, where a small cooperage was set up to inform the visitors about the importance of wood used in whiskey making and cask-management, including a short video of how a cast is repaired – a task still maintained on-site by the residential Master Cooper and his apprentice. In the small warehouse we could see a number of cross-sections of casks explaining angel’s share and ageing. And the smell… heavenly.

THE NEW MIDLETON DISTILLERIES
Opposite the Old Midleton still house, we find the latest addition in the Irish Distillery family of distilleries – the company’s experimental Micro Distillery, where their latest Method and Madness brand had its birthplace. The difference in size is enormous, where the almost 144.000 litres was the largest still in the old distillery and the largest addition in the experimental distillery is only 2.500 litres. The procedure however, is exactly the same, albeit a little less labour intensive as it must have been in the old days. In this small distillery are no mash tuns or filters or even washbacks yet, but they use what they can get from the New Midleton distillery at the back of the terrain.

This New Midleton distillery is the plant that has been built in 1975, replacing the company’s three distilleries as described earlier. We can only see the distillery from the square, as it is an operational factory, and sadly not part of the tour, but we can tell you it has a lauter tun in the brew house, a total of 14 washbacks used for grains and 10 washbacks used to ferment (malted and unmalted) barley. Distilling in four large copper pot stills and five column stills, they produce the various brands the distillery offers. In 2013, a completely new distillery was added, modernising the brewhouse with a hammermill and a mash filter, 24 stainless steel washbacks and a still house, housing three 80.000 litres pot stills. Six new, larger column stills replace the old columns, modernizing the distillery, making it ready for the future, producing up to a combined 56 million litres spirit per year. 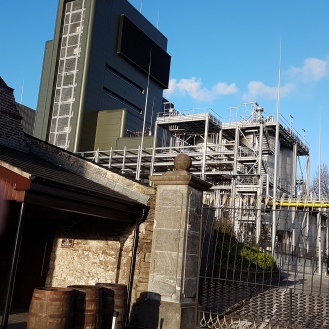 In the spring of 2017, another three similar sized pot stills are added to the Garden Still house, creating a fully automated operation of ten large pot stills and six column stills, continuously fed by numerous washbacks (we kinda lost count here), creating the Jameson, Midleton, Powers, Redbreast, Spot, and Paddy labels, raising production to 64 million litres per year. Current projections say that the distillery may even expand once more, and as soon as 2024, to keep up with the growing demand in the ever growing popularity of Irish whiskey.

After the tour takes us back into the bar for a comparative tasting between Scottish, American and Irish leading brands, we enjoy a nice lunch before adding a “bottle your own” to our luggage and head to the airport. An eventful three days for us. Our first time in Ireland made us want to come back for more and enjoy the scenery in a more relaxed pace. We are told the east coast of the country we have now seen isn’t the prettiest to look at, but we are already satisfied by the flowing hills and stretched out vistas, to find ourselves planning ahead for the future, where we will come back and enjoy some of the east and west coasts, as well as the north and south, touring around the country. We might try to sneak in a day at the Jameson Academy too, to pick up some more information about Irish whiskies.

Copyright notice: The Garden Still House by John Sheehan Photography. Rest of the photos by WhiskySpeller.